I'm withdrawing from all LinkedIn discussions and have ceased interacting in LinkedIn groups. Why?

No, it's not that I hate receiving email notifications for discussions in LinkedIn groups. It's that the emails are now next to useless.

Not long ago, discussion notifications would contain the full text of someone's discussion comment. 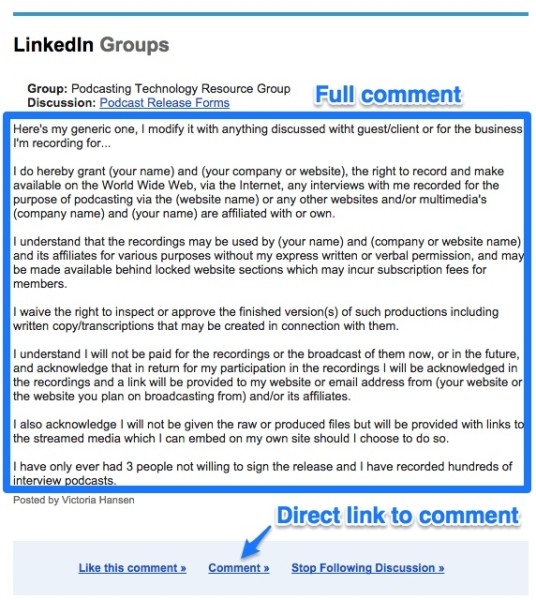 Clicking “Comment” would take me directly to that comment on the LinkedIn discussion page, making it really easy to continue the conversation.

Now, discussion notifications barely contain any text from someone's discussion comment. Even this text is confusingly buried under the heading and description of the discussion. It's practically as small and insignificant as the post meta info! 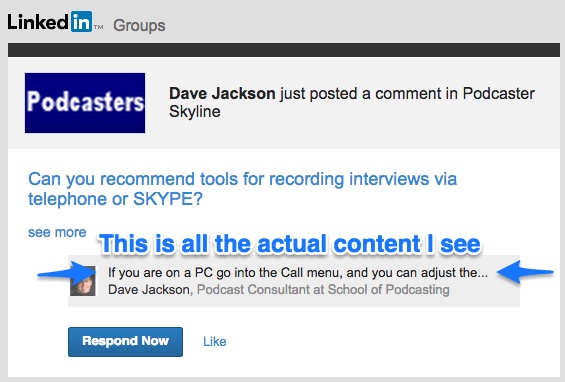 Additionally, clicking “Respond Now” doesn't take me directly to the comment, anymore. It now takes me to the top of the discussion, so I have to scroll down to that specific comment. What is there even to respond to?

Even worse, LinkedIn discussions are now lazy-loaded via Javascript. That means content doesn't load until I scroll down to it. So if a discussion has a lot of comments, I have to scroll down, wait for content to load, scroll again, wait again, scroll, wait, scroll, wait.

Seriously, this killed my enthusiasm for participating in LinkedIn discussions—I can't tell what someone said from the tiny excerpt of their comment, and I can't quickly get to their full comment.

This has made me cease all participation in LinkedIn discussion groups (even discussions in which I previously participated).

What do you think about this change? 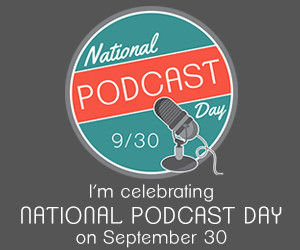 To celebrate this week's National Podcast Day, I'll take you inside my podcast app and show you every podcast I subscribe to and listen to regularly.

When Apple released iTunes 4.9 on June 28, 2005, I immediately started looking for these new things called podcasts. I quickly fell in love with the medium and ditched terrestrial talk radio in favor of the niche topics I could listen to in podcasts.

My podcasts subscriptions come and go, but I thought you'd like to see the list of podcasts I listen to as of September, 2014, in case you're looking for something new. Some of these podcasts have podfaded (no episode in six months), but I remain subscribed in hopes of new episodes someday.

Events become more interactive, memorable, followable, and fun with official hashtags. Picking the right hashtag for an event can be its own challenge. But don't complicate this further by adding consecutive numbers!

What kinds of numbers?

It can be cute to replace “for” with “4” and “to/too” with “2.” But I'm primarily addressing the consecutive year or conference number's being included in a hashtag.

For example, the New Media Expo hashtag is #NMX. But the conference in 2015 could use a number in a variety of ways.

These kinds of numbers would change with each instance of the conference. Here are 7 reasons why you should consider not using a consecutive number in event hashtags.

(I'll continue to use New Media Expo as my example.)

No matter how much you try to communicate the right hashtag, using consecutive numbers inherently creates confusion. Would it be #NMX2015 or #NMX15?

This gets even more confusing if you use a conference number that is close to the current year. Such as if 2015 is the twelfth New Media Expo. Then the hashtag might be #NMX12.

Additionally, there will still be those who don't know to use the number at all. So you could end up with attendees using #NMX15, #NMX2015, #NMX12, #NMX, or several together. This means separate conversation streams, or hashtag-spammed messages.

There are benefits to separating conversation conversations into years. But it's not entirely necessary. Anything that can display a hashtag archive can filter, sort by, or at least display the date.

#NMX14 would be a separate archive from #NMX15. If I attended both events and wanted to find a particular message someone shared, I'd have to try searching both hashtags. (Most hashtag-compatible platforms search hashtags as a whole word, so #NMX would not return #NMX14.)

Using a single hashtag across events allows the conversation to keep going, and builds on the branding and knowledge of that event.

If someone is interested in attending the event, they can search the hashtag and find all of the awesomeness from previous years. This single archive wouldn't exist with a hashtag that changes every year.

An event hashtag without consecutive numbering also makes it more usable for those who prefer to mute the tweets from such conferences. They have to mute only a single hashtag, instead of updating their filters every year.

Banners, business cards, posters, videos, and any other generic marketing material would have to be remade for every conference just to update the hashtag. This wastes time, money, and materials.

When I organized PodCamp Cincinnati in 2011, I decided that our hashtag would be #PodCincy. I had it printed on all of our signs and banners. If we ever host the event again, then we won't have to reprint any of these materials.

4. Numbers are harder to type on mobile

Most social-network posting from an event will happen from a mobile device. Depending on the Twitter app attendees use, typing the pound sign / hash mark may be hard enough, but adding numbers further slows them down. Mobile uses may have to either use a key combo, or long-press a key in order to insert a number.

Hashtags without numbers are quicker to type.

When your hashtag uses consecutive numbering, the conversations are less likely to carry through the whole year. Without a number, people can continue to monitor and participate in a single conversation for years.

6. Numbers increase the length of the hashtag

#NMX is nicely short. Including it in a tweet will cost only five characters (including the space before the hashtag). Add numbers, like the current year, and you'll require up to four more characters.

This doesn't seem like much of a loss, but it can make a big difference when Twitter is already limited to 140 characters. Cut that down to 120 to be universally tweetable; bring it down further to about 100 characters to include a link (such as a photo, video, or website). Pretty soon, ever character occupies precious space for communicating.

Is #NMX15 the fifteenth conference, or for the year 2015? You can clarify with a four-digit date, but then you're creating more confusion and a longer hashtag.

Imagine a hashtag like #swell15. In different fonts, the “1” may look like a capital “I” or lowercase “L.”

Remember that hashtags are not case-sensitive, so you'll see all combinations of capitalization (or lack thereof). Mix these with numbers and it becomes easier to misread or mistype.

What do you think of numbers in hashtags?

If you disagree with my conclusions, please share your thoughts in the comments! Especially share some examples where consecutive numbering do or do not make good sense with an event hashtag.