My podcast network was growing fast, especially my Once Upon a Time podcast with its new forums. I was hosting on a virtual private server from HostDime, but that couldn't keep up with the large demands of my WordPress multisite and phpBB forums. Then I upgraded to a dedicated server for $160 per month.

But it still wasn't powerful enough for my sites. (Since then, I've learned a lot more about managing a server and know how to run my websites with fewer resources.) Thus, it was time to find a better host.

Around that time, I heard about Synthesis managed WordPress hosting from one of my podcast-consulting clients. Considering that I was already paying $160 per month for hosting, Synthesis's $147/month plan looked like it would save me some money and give me better performance and features. I also heard great things from my client, so I jumped in.

I stayed with Synthesis for over a year, and here are my thoughts on their service.

As a managed WordPress hosting provider, Synthesis would only host WordPress-powered websites. They designed their infrastructure specifically for this purpose, and also optimized their system for websites running the Genesis Framework (though it's not a requirement).

In addition to the backend technology, they also provided attractive extra features (on top of everything you would normally expect), like daily backups, SEO tools, uptime monitoring, and “Personal Backups” to my own Amazon S3.

When I joined, their site said they supported WordPress Multisite on the $147/month plan and higher. Since they are WordPress and Genesis experts, I could trust that my site was in good hands. They could recommend plugins, settings, and tweaks for my site performance or features.

With Synthesis, I could also request SSH access and managed certain aspects of my site by myself, or perform certain actions faster.

Synthesis was designed for speed, and they provide W3 Total Cache (W3TC) Pro, fragment caching, and special optimizations for WordPress with Genesis-Framework-powered themes. On Multisite, they recommended their own server-side caching system instead of W3TC, but it would always cause more problems than it solved on my network.

Compared to my previous VPS and dedicated server, Synthesis loaded my sites quickly and could handle a large number of simultaneous visitors.

Synthesis introduced me to a different way of running a web server. Most regular hosting companies will use Apache. That software is designed to do many, many things. Nginx is the cool, new kid. Nginx doesn't have all the bloat that Apache has, but Nginx has what it needs to run most standard websites with popular content-management systems. Synthesis is naturally faster because of using Nginx instead of Apache.

Since Copyblogger makes both Synthesis and the Genesis Framework, Genesis is included with Synthesis hosting, which could save you a little money if you want to be just a Genesis child theme from StudioPress or Appendipity.

When I first started hosting with Synthesis, I wasn't too concerned with extensive features. I was impressed with the features Synthesis offered.

But after signing up and migrating my WordPress Multisite, I discovered that some of Synthesis's features don't work on WordPress Multisite: Personal Backups to S3, SEO Scribe (no longer offered), and their own server-side caching (at least with my site).

My time with Synthesis was good, but I was becoming increasingly frustrated with memory errors (even though I think they generously gave me an extra 2 GB for free), caching problems, and stability. All of these problems are related to the complexity of my site and are not directly the fault of Synthesis.

I was also looking at the recurring $147/month fee and trying to find a way to reduce my business's operating costs. Now that I have more knowledge on running my own server, I went back to a virtual private server (VPS) to save a lot of money, but missing all the support that Synthesis could provide. (I'll detail my final hosting destination more in a future post.)

Of all the managed WordPress hosting providers, Synthesis offers the most traffic for the best price. My same sites would cost more than $200/month to host with other companies, but only $147/month with Synthesis.

If you choose Synthesis, I know you'll be in good hands and won't have to expect a high price in the managed WordPress hosting industry. (And if you sign up, I, unfortunately, won't receive any affiliate commission.)

Special promo available! If WP Engine is right for you, sign up for a prepaid annual account in May, 2015 and use promo code “POOLPARTY3” to get three months free!

I have been searching for a new web host for my high-traffic podcast network running WordPress Multisite with a massive bbPress forum. I tried WP Engine for a short time and I was impressed, but could not afford to be dazzled.

Make sure you read my initial thoughts on managed WordPress hosting to understand my needs and perspective.

WP Engine was easy to manage. I could create and delete my own WordPress sites, easily add redirects, and backup and restore on demand. Making a staging website took just a few clicks, and I could test new plugins or themes without breaking my public site.

I loved my time on WP Engine. I used GTmetrix and Pingdom to test my sites after my migration. Every site loaded at least 20% faster than on Synthesis, and the WP Engine's CDN was amazingly fast.

I was having performance issues with my website on Synthesis: “404” errors on save/publish, missed cron jobs (like scheduled posts), and intermittent connectivity while editing posts. Once I was on WP Engine, all of these problems went away. (I will detail Synthesis more in my next managed WordPress hosting review.)

Because I'm also a web designer/developer, I have started learning how to use SSH for command-line operations. SSH is much faster for moving files, importing and exporting databases (especially a massive one like mine), monitoring server performance, and pushing my local Git changes to the live server (via Dandelion). But WP Engine doesn't allow SSH to any of their customers. Thus, my workflow was crippled and I would often have to wait on their support team to fix something, or slow down my workflow.

Managing files over SFTP was sometimes strange. I would upload plugins, then have to reset permissions before WordPress could update the plugin. SFTP and these odd permissions would also not work well with my Dandelion workflow. I probably could have accomplished similar things with WP Engine's Git Push feature, but it was initially too complicated for me to attempt (I'm still a Git beginner). 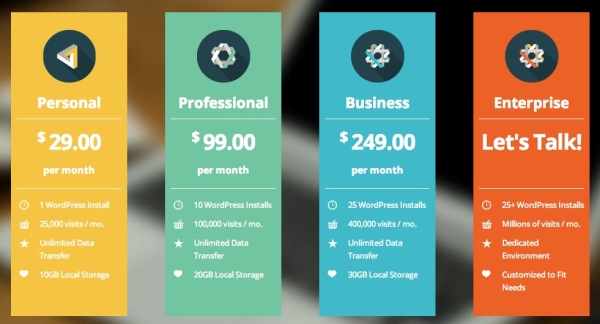 I looked at my highest-traffic days in Google Analytics and estimated that I would be near 100,000, so the $99 plan looked tempting compared to the $147 I was paying to Synthesis. I knew that WP Engine tracked the traffic differently, so I expected to pay occasional overages, but probably never more than $150 per month.

What I didn't try

Git is a pretty amazing technology for version control and development. WP Engine has this already built in, which may make some of you salivate. I never had the opportunity to try it.

WP Engine also offers enterprise plans for extremely popular WordPress sites. These come at a high cost, but anyone at the enterprise level would recognize the value of a stable host with quality service and great support.

I have to look elsewhere for managed WordPress hosting

Sadly, I decided I had to leave WP Engine. I absolutely loved their performance and features (except for the weird SFTP permissions problem and lack of SSH), but I couldn't justify the higher expense. After all, this whole process was inspired by a need to reduce my monthly costs while maintaining or improving my performance.

Thankfully, I could get a full refund within a 60-day window, which is very generous.

WP Engine is certainly a great managed WordPress hosting provider, and I do genuinely recommend them for hosting your sites. WP Engine provides great support, wonderful features, and amazing performance. Just be careful with your traffic if you're on a tight budget.

In my next managed WordPress hosting review, I'll review my time with Synthesis by Copyblogger, and why I left after more than a year.